10 Common Recycling Myths That Need to be Talked About 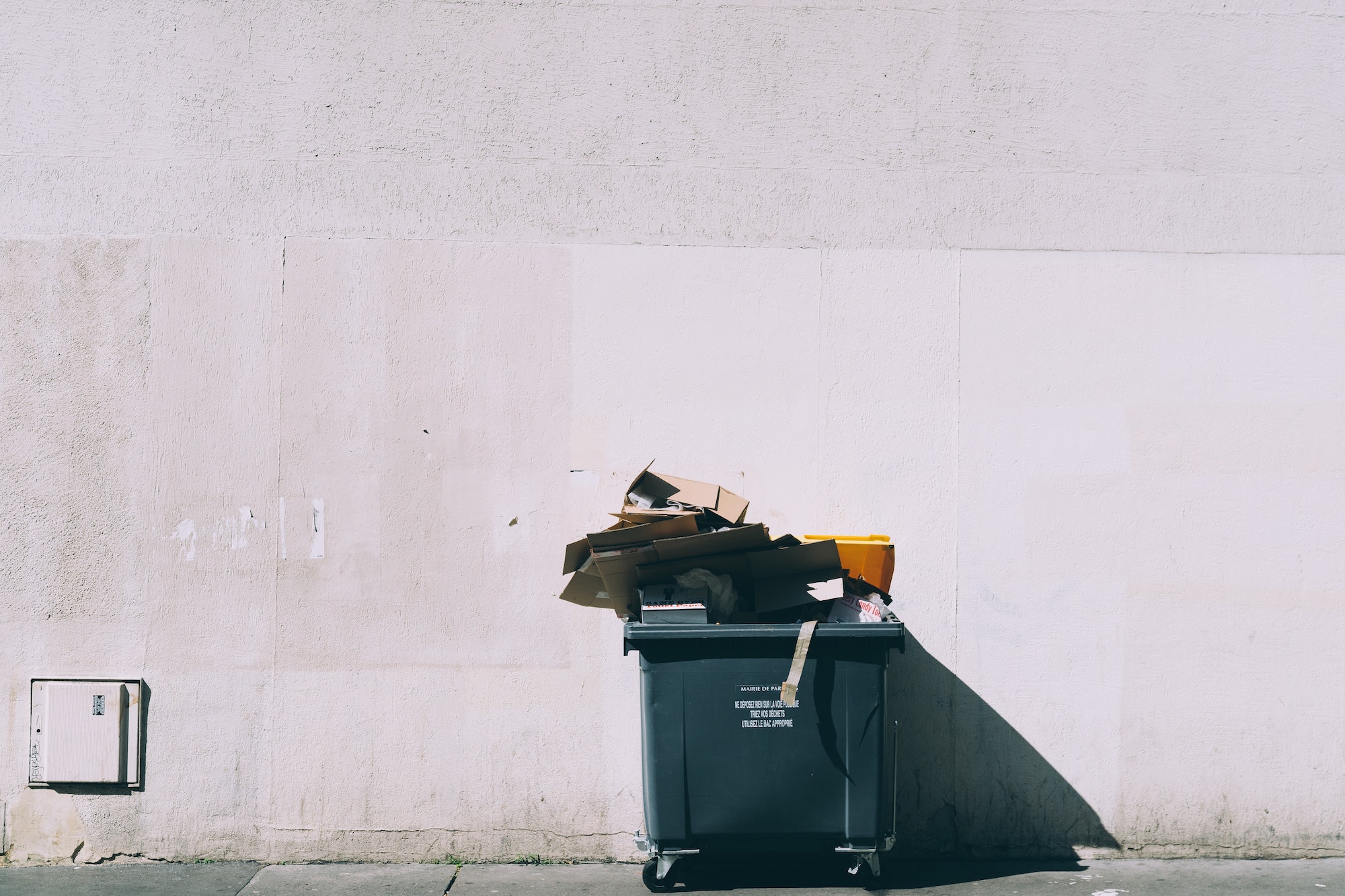 Raise your hand if you were today years old when you realized how complicated recycling is. When I was growing up we had two bins in our garage—one for paper and one for plastic. In them I’d toss newspapers, boxes, and all my single-use plastics, blissfully unaware of how complex the system actually was. And equally unaware of how improperly I was contributing to it.

To start, I was under the impression that recycling would abolish my carbon footprint (which as a 10-year-old, I thought consisted of how many candy wrappers I threw away and the amount of lights I forgot to turn off). I also thought that plastic bags had a home in the recycling bin, that water bottles would just become new water bottles, and that peanut butter jars would magically be cleaned by the recycling fairies.

These were all common recycling myths that I had fell prey to (because again, I was only 10 years old). As an adult I recognize the nuances of recycling. As well as the fact that many of my peers are still as blissfully unaware as 10-year-old me was (which is not their fault, recycling=confusing). So to help make things easier, I popped on my Sherlock Holmes cap, and investigated 10 common recycling myths. Read on to see what I found out.

Myth #1: Your recyclables have to be squeaky clean

While it is best to leave as little food residue as possible on your recyclables, they don’t have to be sparkling clean. In a statement, Sara McGann, Chicago’s Department of Streets and Sanitation spokesperson, said that residents should empty their containers and give them “a little rinse” before tossing in the recycling bin.

Likewise, the EPA recommends that paper and cardboard takeout containers be “spatula clean,” indicating that scraping off any food residue with a spatula should be sufficient.

On exception is grease on paper products (i.e., your empty pizza box). Unlike plastic, glass, and metals, paper doesn’t get heated during its recycling process. This means grease can combine with the paper pulp and contaminate the batch. Pro-tip: recycle the parts of your pizza box that are grease-free and compost the rest.

Myth #2: Labels must be removed from containers

Stop wasting time peeling off those mayonnaise labels. It’s probably about as necessary as a landline in 2022. Most collectors do not require that labels be removed since the item will likely go through a heating process to burn off labels and glue.

That said, I’d recommend researching the rules for your particular city as it can vary by collector.

Of all the recycling myths, this is the one I’m most passionate about debunking. Probably because my apartment’s communal bin is always littered (pun-intended) with plastic bags. They can’t be recycled though. At least not in most municipal programs. So if you’re throwing cans in a bag and setting them out for recycling pick-up, they may be going straight to the landfill.

The reason: bags get caught in machinery. Even though recycling plant workers try to remove them before they become problematic, many slip through. This can often cause machinery damage and facility shutdowns as workers remove rogue bags.

Instead, avoid using plastic bags as often as you can by bringing reusable bags when shopping. And if you do have plastic bags lying around, look for ways to upcycle them. You could also donate them to organizations in your area that use them for making mats for the homeless, or drop them off at a plastic film recycling point near you.

Myth #4: Every piece of plastic with a recycling symbol is recyclable

It’d be reasonable to think that anything with that ubiquitous “triangle-made-out-of-arrows” symbol is recyclable, but alas it is not. The devil is in the details here. Or rather, in the center of the triangle. That’s where you’ll find a number, one through seven. These numbers indicate a type of plastic, and not all types can be recycled in municipal facilities.

This is where you’ll need to do some research. Types four and six (plastic films and styrofoam, respectively) are not accepted by most cities. That said, the type of plastic accepted can vary greatly by municipality. So look into what types of plastics your city recycles before tossing your yogurt container in the blue bin.

Some believe that recycling uses more energy than it saves and therefore the whole process is pointless.

“It is a waste to recycle when the costs of doing so exceed the benefits,” Professor Daniel K. Benjamin, a senior fellow at the Property and Environment Research Center (PERC), told Big Think in an article. “In most cities across the nation, recycling of household trash is, in fact, wasteful, even when we take into account the meager environmental benefits of such recycling.”

In that same article Eric Lombardi, CEO of Eco-Cycle, argues the opposite.

“Recovering resources from our trash cans and remaking products out of them saves energy and saves money,” says Lombardi. “I’ve been selling recyclable materials for 25 years.”

Lombardi’s view is supported by studies from the EPA, which state that recycled paper requires about 60 percent of the energy required to make paper from virgin wood pulp. Recycling steel cans saves between 60 and 74 percent of the energy needed to produce a new one, and recycled plastic requires two-thirds of the energy that new plastic does. The list could go on, but the point is that while every production process will have its environmental drawbacks, reusing something that exists will nearly always be more energy efficient that creating something new.

While glass containers for food and beverages are 100 percent recyclable, they’re no good without a proper recycling process. Unfortunately many cities in the United States have switched to a single-stream recycling system. This allows citizens to collect all their recyclables in one bin, instead of sorting them out. More convenient for the everyday person? Sure. More convenient for recycling facilities? No.

With single-stream recycling, glass will often break in the bin or on the way to the recycling facility which leaves shards of glass mixed in with all the other contents. Not only does this make the glass harder to recycle, but it’s dangerous for recycling facility workers to sort though.

It’s also important to note, other types of glass like drinking glasses or window panes are not curbside recyclable. They’re comprised of different materials which can actually destroy the quality of recyclable glass as it moves through the system.

Like with most of these recycling myths, it’s best to check with your particular city to determine how it handles glass recycling. When it doubt, throw your glass jar away, or find a creative way to reuse it.

If you’re a frequent user of disposable water bottles and rationalize it by telling yourself it will be recycled into a new one, you may want to think about joining the reusable water bottle club.

When plastic is recycled, it’s most often, “downcycled.” This is because most plastic waste is shredded and remolded in the recycling process, which makes the plastic weaker. Ultimately, this means the plastic can only be recycled two to three times before it becomes unusable.

That means it’s likely that your plastic bottle will still one day, end up in the landfill.

Myth #8: Coffee cups and milk cartons can never be recycled

I know I’m starting to sound like a broken record, but check with your city on this one. Most cups and cartons are lined with thin layers of plastic and / or aluminum which are incredibly difficult to separate from the paper. Therefore, in many cities they’re not recyclable.

Myth #9: Recyclables just end up in the landfill anyways

There’s a perception among some that recyclables simply end up in the landfill, but that’s not the status quo.

In 2018 69 million pounds of municipal solid waste was recycled, so clearly some of our plastic, paper, and glass does see a second life. The issues are demand and contamination.

In the United States, many of our recyclables are sold to other countries, but if those countries no longer want to accept our recyclables, like China did, then recycling facilities are left shrugging their shoulders. If they can’t find anyone to use it, it ends up landfilled.

Then there’s contamination. Unfortunately, recycling is confusing (hence why there are so many recycling myths). Ultimately though, that means everyday people like you and me make mistakes. Sometimes those mistakes result in a whole batch of recycling being thrown out. Keep reading to learn more about how to prevent that.

Myth #10: One non-recyclable will contaminate a whole bin of recyclables

It can generally be assumed that one or two rogue items will not sour the whole bunch since a sorting process takes place before recyclables make their way through the conveyor belt.

That said, a certain amount of contamination will trigger the disposal of an entire batch. What that amount is though is generally unclear.

When asked asked to comment on the topic, Lisa Disbrow, spokesperson for Waste Management of Illinois, told NPR that bins could be destined for the landfill “if the majority of the cart is filled with [plastic] bags or non-recyclables.”

This is of course one perspective and could vary by collector. However, the bottom line is, if you want your recycling efforts to be worth it, avoid wish-cycling, do not collect your recyclables in plastic bags, and make sure to follow your city’s guidelines.

Did you enjoy reading about these recycling myths? Get access to even more sustainable living tips by signing up for The Eco Edit! You’ll be joining hundreds of other pro-planet enthusiasts who are passionate about bettering the world through small, sustainable steps.

PrevPreviousApartment Gardening 101: Expert Tips For Growing Your Own Food in a Small Space
NextMake Your Next Vacation Planet-Friendly with These Sustainable Travel TipsNext

Earth Day is over—now what? #ad⁣ ⁣ You keep

Anyone else feel like Earth Day should be more wid

Swipe to see my best impression of a cactus...⁣

How can you lower your dog’s carbon footprint...